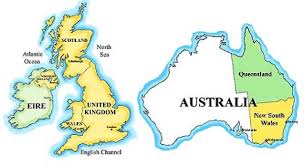 I am sat here talking to my Aussie relative on Facebook who is waiting to be picked up for her flight to the UK! Very exciting and gave me  a great topic to talk about today.

We didn’t know we had these relatives just over a decade ago. She was researching her family tree (on my Mum’s side) and found relatives in Australia. This wasn’t a great surprise as we have lots of relatives over there – or ‘rellies’ as the Aussies call it! – my gran’s sister for one and her family and also aunties etc.  But I think of them as aunt, uncle and cousins. Can never have enough aunties can ya? 😉 Anyway, we didn’t know who they were to start with and had the name of my Aussie aunty’s great-grandmother. But my Aussie aunty just so happened to phone my gran one day. She found the surname and randomly circled some of them and it was her fourth call that gained her some extra family. Turns out her great-grandmother, who we had the name of, was the sister of my granddad’s granddad! Woah.

I remember thinking it seemed a little bit too good to be true and felt quite wary. We started talking to them via phone and email. They seemed really nice and down to earth but it still felt quite surreal. They planned to visit the next year, which was 2003. I remember feeling a bit odd about them staying at my gran’s. I thought ‘god they could be criminals – you hear about the aboriginals!’ It was the whole not meeting them thing and of course they had to visit in order for us to get to know them. My aunty came on her own that visit and we all got on well and she met everyone she needed to meet and saw lots of the UK.

Three years later, we went to visit them. Christmas 2005. I was in my second year at Uni, as I remember I had to take some books with me to study whilst I was there! Christmas was odd in Australia. I got sunburnt on a boat trip on Christmas eve! And we had a BBQ for Christmas day dinner! It was great though and we met they rest of the family. I also got to see santa in shorts, which was a definite novelty! Other things that I thought were odd – there was no proper Marmite and the chocolate didn’t taste as good (even though it said Cadbury’s on the wrapper) and they called flip-flops ‘thongs’. I had to remind myself that they weren’t on about wearing a tiny piece of underwear on the beach! Haha. Upsides of course were meeting the family, the weather (even though it was the coldest summer on record for them – it was still very hot for us Brits!) and seeing come great places.

As for spiders….. my hugest fear ever… I didn’t see any! I was oddly disappointed. I went to the other side of the world and expected to see a huge spider. Maybe it would put the UK ones into perspective or it would have cured my fear, I don’t know. Not one black furry leg in sight! The closest thing to anything scary I saw was a shedded skin of a snake. I hope they don’t bring any with them – I’m not that bothered about seeing them!

As my family get ready to come for a visit tomorrow (my aunty and uncle are both coming this time. My sister went to visit them last year but other than that they haven’t seen us since 2005!) my friend is also coming back to the UK soon after being there for a year. I had this vision of them all being  on the same ‘return to the UK’ plane haha – as if there is only one a year! In reality of course, they are coming weeks apart. My friend, though, was very homesick when she first went to Oz a year ago but soon settled in to life down under and now doesn’t want to come home (with weather like this, I dont blame her!)

But I am very much looking forward to catching up with all the Aussie goss from my friend and family. And asking them if water does in fact go down the plughole the other way over there? People always go on about that don’t they?!

See you tomorrow….(UK and Aussie time!)