I don’t know if any of you remember a blog post I wrote about a year and a half ago: https://samanthagray9.wordpress.com/2012/08/09/two-hearts-two-rings/. It is about my mate’s engagement and how she didn’t like the ring etc….. take a look.

I wouldn’t have thought that a year and a half later, I’d be sitting here writing the story of my own engagement! 🙂 Yay! Yes, in the new year I got engaged…. to my boyfriend just to be clear! Just over 2 weeks since he has proposed, and it is now 4 times in total! And there has been 2 rings…….. let me tell……

We went to London just after New Year. We had already planned to go to Harry Potter world and stay a couple of nights down in London – instead of birthday and Xmas presents to each other. What I didn’t know, was that Kenny had also booked the theatre and dinner in a nice restaurant for the following evening. He had originally booked tickets to the Apollo theater, but it was shut because of the ceiling collapsing! The seats would have been exactly where that happened too, so it’s a good job we didn’t go to London a couple of weeks earlier like we had suggested 😉 A whole of other meaning to being blown away by a great show!

Anyway, I wasn’t very well over New Year and I didn’t start to feel better until our second evening in London – the theatre and dinner one! Kenny told me later that he was wondering whether to propose still or not. I joked, ‘You didn’t want me if I was snotty?!’ He said he hadn’t wanted to if I was feeling ill. As I say, luckily I felt better. Kenny also told me later that he had the ring on him all night. But – obviously the theatre wasn’t the best time (best leave the show to the professionals!)  – and at dinner, we had seats at the chef counter. It was busy, lively and fascinating sitting inches from the chefs cooking our meal. But not a great time to propose. Fortunately, Kenny had decided this too because the ring had to stay in his jacket throughout the meal! We handed them into the cloak room and he said he couldn’t have got it out as I would have seen it/or asked him what he wanted out of his jacket! And knowing me – I would have!

So, that left the hotel room when we returned. And I’m glad that was how it happened. Just us two. I was really tired when we got back and proceeded to take my make-up off and get ready for bed – all the tubes and trains to get back to our hotel outside of the centre had exhausted me! Kenny got us a glass of prosecco each and sat next to me, as I scrubbed mascara of my eyes. Wonder if he had second thoughts?! Ha! He then took out various receipts and tickets from his pockets and gave them to me. He knows I like to save them for photo album scrap books. He then said, ‘There’s something else in here for you too…’ And he presented me with a huge, black box. Seriously, it was twice the size to how I ever would imagine a ring box. I figured it must be a necklace…

Hours went by… or so it felt. In reality,  just a few seconds.

He opened the box to reveal a sparkly, ring.

I didn’t want to assume it was that kind of ring!

This was typical of Kenny… no immediate words. He was making me work it out!

He then said….’Will you marry me!’

I think I said yes, but I was a little in shock. We’ve been together 9 years, so of course I’ve thought about it. But I certainly wasn’t expecting it at that moment! I then, suddenly realised: he hadn’t got down on one knee! I asked him to do it again! I was milking this proposal situation for all I could 😉 He did, bless him!

Then half an hour later, I asked him to say it again. It was still a novelty and I wanted to hear the words again! I then replied no! 😉 We both laughed – I’d just wanted to try out the negative response to make sure of how I felt about it 😉 (That idea was from Time Traveller’s Wife haha).

You’ll be wondering about the 4th proposal and the 2nd ring? Well, I loved the ring. I still do – that isn’t meant to be past tense for that reason. But the ring was too big. We went straight to the jeweller’s when we got back. We found my correct size (The typical, modern, size-obsessed woman in me was dead chuffed to have fingers 2 sizes smaller!) The ring had been discontinued. But there was one in the country. In Portsmouth. I just had to wait a week for it to be posted.

So, on the Saturday – which was the week later – I went to collect my ring. It hadn’t arrived with the courier. The manager was phoning me and checking it all morning, whilst I met a mate for a cuppa; had a manicure; did some shopping (tiring life for the engaged!) but it still didn’t come 😦 The shop couldn’t have done more though so I didn’t mind. It just meant, for our engagement party, I had to wear a jokey, chunky pink butterfly ring  – as I was fed-up of people grabbing my hand and there not being anything on it! Haha. (I lost that ring down the toilet – but that’s a whole other ring story……… 😉 )

Anyway, on the Monday, the manager of the shop personally brought the ring to me. He came into the house from the wind and rain. Stepped into our living room, opened the ring box. And it fell out. Into our shoe box and into one of the shoes! I thought, ‘I’m really not meant to have this ring!’ But then it got to where it belong s- and I’m proud to say it is still there (and hasn’t gone down the toilet!)

That’s where the 4th proposal came in – that evening, after dinner.

I said that an engagement’s ring’s purpose in life is to be proposed with and this was a different ring!

So he asked me again with the perfect fitting ring: and I said yes! 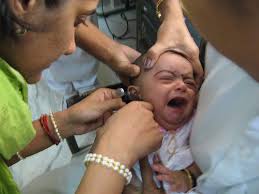 I’ve been trying to change my earrings today – remember I’ve not long had them pierced? It’s proving to be difficult and since it  hasn’t been quite 6 weeks, I’m going to leave it a little longer. Damn things won’t budge!

It made me think of a lot of articles that have been littering Facebook. Piercing your young child’s ears: OK or not? My instant reaction to this is ‘No. Not OK.’ Simply because it is a fashion statement and something that young children do not need and should be able to make their own choice on the matter, when they a.) Know what it means/entails b.) are old enough to change the earrings themselves. As I say, I am struggling to change mine and I’m 28. I chose to do this to myself and they are a bit sore. Children with ear lobes 20 odd years younger, who did not choose this, should not have to be probed and pulled at in order to change them. The child above in the image does not look happy. They won’t be any happier when they have them done. Because they won’t even know! Who gains from this process?

There was the issue of ‘child abuse’ on one of the threads that I read. Some people were throwing this term about and saying it was indeed abuse, whereas some were saying this is a term that is said too frequently and something like this doesn’t warrant abuse. Well, it isn’t the same abuse as beating a child, or sexually abusing a child or mentally bullying a child. And it shouldnt belittle any of those horrible examples in comparison. But I still think it is a form of abuse: you are doing something physical to your child that they have no choice over. You wouldnt tattoo your child, would you?

Another example was immunisation  – which is a bit of an idiotic example if you ask me. Yes, it is something physical you are doing to your child without their will, but it is medical and to keep them healthy, and perhaps in some incidences alive. Another silly example was about keeping a child in a push-chair. They may struggle to get out, so you are physically doing something against their will. But again, this is safety. And, I’m not a parent myself, but don’t you have to do things against the child’s will in order to parent them? I just think ear-piercing doesn’t need to be one of them.

Circumcision was another interesting example. People were saying that gets done, so why shouldnt ear-piercing? Well, again this is a lifestyle choice (yes, I know it is sometimes determined and directed by religious choice) and I also think the child should decide when they are old enough.

I guess the reasons people pierce their child’s ears is to make them look prettier perhaps? Which to me as an insult to the child. If they need some sparkly things to make them look cuter, then maybe the parent’s genes weren’t attractive enough to start with! I can’t really think of another reason why people would want to do it to be honest – to make them grow up quicker? This is sad though, because kids grow up too fast as it is. We may all disagree on what actual age children should be. I think they should have them pierced as teenagers – when they are old enough to go to town with their mates and all have it done together. There is no rush for something like this. There are plenty other options of jewellery to make them ‘pretty’. I should know – I had 28 years of that ‘limited’ choice! Also, rememeber you have to be 18 to have a tattoo, yet there is no age for ear-piercing. Barmy!

I always wonder if it is some kind of control, like a branding. Do parents think this is way of making their children more customised to their personal ideas and choices? A bonding experience of blood and scabs between child and parent? I’d be happy to hear some further ideas as to why, as I just don’t get the need for it.

Religion as a whole is another example of children not having a choice – yes I know, I’m banging on about it again!  Should children get christened when they aren’t old enough to decided which religion (if any) they want to follow? I was christened but I am not a Christian now (through my own choice). My Mum said once that I was christened with holy water from Jerusalem and it was wasted on me! Haha. Maybe being christened doesn’t matter, because you reject the religion later anyway – but I still think, like the piercing, it should be a choice made by the person themself.

The importance, is not their ears, but their voice. Their voice gives them a choice – as we all have the right to.

Holes or holy – we all have our own right to decide 😉