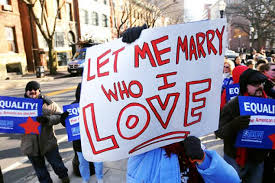 …… but  gay people won’t be able to have gay affairs if they aren’t allowed to wed in the first place!

You may have gathered that I am straight. I am a female and I have spoken about my boyfriend on many occasion – who is male. So I am not a gay man or a lesbian woman using my blog to try and get my views across. No. I am a straight woman, using my blog to give my views on the matter. Giving the homosexuals an extra voice if you will.

It seemed a good time to write this today. The political debate has been going on for a while now, plus I went out for my GBF’s (Gay Best Friend – referred to in prrevious posts) birthday on Friday. Also, last night, I showed the said GBF an essay I wrote at Uni about the origin of the word ‘gay’. So I am going to combine all thoughts of these subjects into today’s post.

I’ll start with our Friday night out. It was a real ‘gay affair,’ I have to say. We had Tepanyaki at a Japanese restaurant, which was served to us, funnily enough, by a very camp Japanese chef. Me and a few mates spent the night guessing if he was gay or not. He put cups under his top at one point and blew kisses at the males and femles, yet wouldn’t come and feel my boyfriend up – I’m not sure who this says the most about 😉

The night was fun, followed by Karaoke. I took the piss a little out of my friend for this saying it was all a very themed night 😉 He likes various langauges and cultures, so the night wasn’t a surprise, I just loved how it was all inkeeping with the Japanese idea – but that was partly the restaurant I guess 🙂 The first song to be sung was Papa don’t Preach by one of my GBF’s lesbian friends. She homosexualised the lyrics with, ‘Papa don’t preach, I’m a lesbian.’  – you’re all singing that to yourself now, aren’t you?!  I felt it was a bit ‘much’ for the first song of the night as some of the lyrics were very female love explicit 😉  – maybe I just hadn’t drank enough! But the homosexual supporter side of me was filled with admiration for this girl. She was singing in a public place about her homosexuality with pride, confidence and joy. Why shouldn’t this girl marry who she wants to one day?  Across the room there could have been a very unhappy, hetreosexual couple – stuck in a marriage they are unhappy with. Who is the happiest?

That’s what I think it all comes down to. Happiness. To quote the picture at the top, ‘Why can’t people marry who they want to?’ There have been subjects arising such as religion, kids, society – blah blah blah. People should have the free will to love who they want and celebrate it how they choose. To touch on the ‘kid’s’ subject, I also think that a child in today’s society is  likely to be just as happy with two loving dads or two loving mums than they are with a mum and a dad who are fighting, or with a single mum or dad or even with the whole ‘conventional’ family. Let’s face it, the idea of ‘family’ has changed over the last fifty years anyway, so why shouldn’t the marriage rules?

Someone said to me that ‘marriage is between men and women.’ I replied with, ‘it has been up to now, yes. But why can’t that be changed?’ Men were only allowed to vote until the suffragettes came along and until then ‘voting was just for men.’ That changed, so why can’t this? My friend’s reply was that gay people can have a civil ceremony and they should be happy with that. Well, why can’t they have the same as anyone else? If marriage is just a piece of paper then it is down to the inidividual to decide if they want that piece of paper. It shouldn’t be a case of ‘marriage is just a document and won’t affect their lives anyway so there is no point in fighting for it.’ If that’s the case then just aboloish marriage altogether then.

This is where the church comes in. Religion has also changed over the years and less people are involved in organised religion. There are many religions and beliefs and people are more confident to explore and believe in what they choose. The Christian (and other) church need to stay with the times, or they will lose even more ‘custom’ so to speak. They believe that God treats us all equally  – well then let them marry equally. MPs are saying ‘we can’t redefine marriage.’ Why not? It is only a case of gender. Man loves woman. Woman loves man. Man loves man. Woman loves woman. All the same service give or take a prefix.

To finish I’ll share with you a little about the history of the word ‘gay,’ which my GBF was very interested to read last night. In 1310 the definition of ‘gay’ was:

‘Of persons, their atributes and actions: Full of disposed to joy and mirth manifesting or characterised by joyous mirth; light hearted exuberantly cheerful, sportive.’

It was nothing but positive back then. To be gay was to feel joy – no matter what the gender or sexual preference. The word was used frequently to display happiness pf charcters in work’s of literature. For example, Chaucer described someone as ‘gay’ in 1386. By Shakesperian times, the term ‘the gays’ was commonly used to refer to men on stage who played the female parts. My GBF and I talked about the fact that these men may have had to feminise themselves and put on female voices but at same time they were over enthusiastic and joyous. Explaining a little about how the two definitoins have had a crossover. Also in the 19th Century, female and male prostitues were referred to as beinig ‘gaily’ dressed. This again gives the idea of the lable ‘gay’ in our modern society: to be feminine, smart, flamboyant (even if they aren’t actually a homosexual.)

So, if we take the old, postive definiton of ‘gay’ to be happy and joyous – then, in my opinion, if we are going to wed, we all need a very gay marriage 😉

Hiya People…. today I am going to risk alienating half of my audience (or at the least males, however many that is) and I want to talk about Feminism. Wait, wait listen up; there is a reason for this. When me and some friends visited our gay friends last night, this topic came up in conversation. By the way I am going to refer to one of the friends as Gay Best Friend (GBF) as he has particularly asked me to do this… and he is anyway; I’ve been very good friends with him since school and every girls needs a GBF like she does shoes, chocolate and a feminist tattoo… oh wait the tattoo bit is just me. (shhh don’t tell!)

Anyway, we were out for dinner and my GBF was telling a story and happened to say ‘He is a Male Whore.’ Now, I can’t reveal who he is on about and the rose wine was flowing so to be honest, I’m not even sure I can remember! But the term ‘Male Whore’ sat wrongly with me immediately anyway. I challenged this and said why did he feel the need to add ‘Male’ onto a word that can mean the same for both genders? This led onto why men get called positive terms such as ‘studs’ and ‘bachelors’ but women get all the negative words.. and this is what I was saying that by adding ‘man’ or ‘male’ onto one of the terms we are saying that the word should normally be associated with women. What do you think of this? I’d love to hear some thoughts…

So me and my GBF began a huuuge debate whilst the other four friends at the table listened (some with interest and I think some were thinking ‘What the hell have you started you whore?!) I revisited my University lectures on Anglo-American and French feminist theories and remembered the argument about the word ‘History’. I am not saying I agree with this bit but I do find it interesting. Some feminists believe that History is like ‘his – story’ and why should it be studied from or be the man’s perspective. I think this is a step too far and my GBF had some interesting insights into this. He knows various languages such as German, French, Swedish and some bits of others. He said that the pronoun ‘he’ or ‘his’ doesn’t always translate into the male gender in all languages and the word ‘history’ comes from latin and the ‘his’ part was actually translated as ‘it’, which in the word ‘history’ gives it no specific gender relation. I think I remembered all this correctly after my few glasses of wine!

We actually stepped outside to continue our conversation after a while… partly to stop the others getting bored and wanting to kill one person off of each gender and also partly because my GBF wanted to smoke and he didn’t want his boyfriend to know… see men can’t even tell other men what to do! 😉 hehe..and sorry GBF for ‘outing’ your smoking habits! We went onto to discuss the word ‘woman’ and is this just the word ‘man’ with the prefix of ‘womb’ on it? My GBF looked from the other side and said that ‘man’ originally meant both genders and that women are lucky to have their own term, whereas men are stuck with the neutral one… well it’s the least we can have after years of not being able to vote!! We also humorously discovered that my name ‘Samantha’ has the word ‘man’ in it and I joked that I couldn’t have that and said my friends should now call me ‘Satha’.

Other topics discussed were when babies are born and they are immediately gendered by being dressed in ‘blue’ or ‘pink’ and this is where my GBF’s boyfriend joined in, who is a psychiatric doctor, and said we wouldn’t believe how much is already biologically determined and even if boys play with Barbie dolls, they may do it in a rough and tumble way and still be determined to be masculine and straight. My point to this was that the individual should be able to choose and parents shouldn’t worry that their girls will be tomboys or their boys dressed in pink with be feminine and gay… because there are a lot of things that determine it anyway. And before you all scream at me, there should’nt be a problem if they were any of those things anyway.

So yes, that was our alcohol fuelled Fancy Friday chatter (my GBF called it Fancy Friday in contrast to our Dirty Thursday due to the contrast that we began the evening by looking round their three storey pad and sipping champagne!) and I realise that this post today has been a lot less light-hearted than the previous ones and to what I have promised, but I’m sorry but sometimes my tattoo burns like Harry Potter’s scar and I have to release all these thoughts. There is no offense meant by any of the above ideas and I don’t completely agree with them all and if anyone has anything to add to the debate then go ahead….

Finally… at the end of the night…… I burnt my bra:

Now ladies, off you go to wash up 😉